To complete our three-part series on permissions, which began with Race-Safe Strategies, let’s talk about the transitional nature of reference permissions.

When are permissions transitional? When we can safely create a copy of a reference which has a different permission than the reference it copied from. There are several ways in which this can happen, which this diagram summarizes (and the following sections explain): 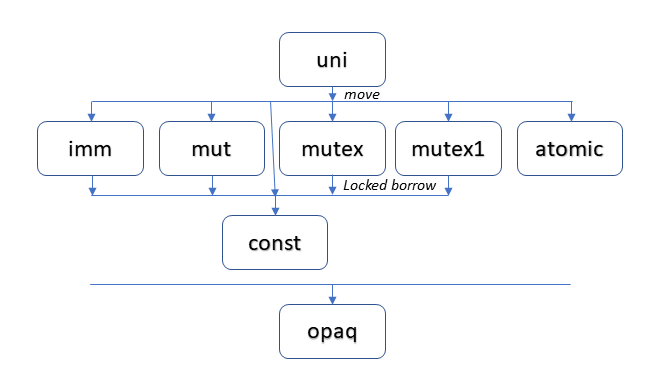 The following sections describe the nature of several one-way transitions that flow downward in the diagram. In the last section, we will explore whether it is ever safe to swim upstream. The capabilities described here broaden on similar features supported by the Rust2 and Pony3 languages, and reflect capabilities planned for Cone1.

As you may recall, the uni permission’s constraint ensures that when a uni reference is usable, no other reference to the object exists. This is clearly true when an object is first allocated, as we start off with just one reference to the new object. Move semantics turns this uni reference into a solo, mutable traveller, able to surf from scope to scope, thread to thread.

Because uni guarantees its reference runs alone, we know that move semantics can also be used to safely transition it to a reference of another permission. Move semantics not only makes a new copy of the reference with a different permission, it also destroys the original reference (thereby terminating its single reference guarantee).

We transition away from uni when we need multiple, shared copies of this reference. We must choose one of the many shared permissions (the second row) to transition to. When we use move semantics to transition to any shared reference (whose aliases can then scatter in the wind), we lose the ability to make another safe transition. Thus, the transition is irreversible: We cannot safely go back, nor can we safely go sideways later to a different permission.

Depending on our choice, object access will thereafter constrained in the same way for the rest of the object’s life: either you can’t change it (imm), you can’t share it across threads (mut), access is managed by runtime locks (mutex and mutex1), or access is limited to atomic operations.

Let’s skip to the bottom of the diagram and introduce the new opaq (opaque) permission. Crazy as it may seem, an opaq reference may never examine or change the contents of the object it refers to. Despite the severity of this restriction, there exist situations where opaq is quite handy, such as:

Where uni is the universal donor, opaq is the universal receiver. A reference having any other permission may be transitioned to an opaq reference. Other than from uni (which requires a destructive move), this transition is performed via a simple copy.

Not uncommonly, we want to call some function and pass it one or more references which we know the function will never try to mutate. Given that reference permissions are part of the type system, when we pass one or more references to a function, the permissions of passed references need to match the permission of expected references. Should we fail to enforce that match, we open the door to race or other safety issues. But, if we are too rigid and strict about this match, we force the creation (via generics or otherwise) of multiply-typed versions of essentially the same functionality.

In the case of mutex and mutex1 (the runtime permissions), we cannot just do a copy to create the const reference. An extra mechanism is needed. First, a lock must be successfully obtained. Then, a borrowed const reference may be created. When the borrowed reference expires, so does the lock.

We can get close to this capability by making certain downward-flowing transitions temporary. These transitions are explicitly performed within a certain scope. When that scope ends, we recover the original permissions we had prior to the transitions, much like “popping” a transition state stack. Furthermore, safety requires that the inner scope be isolated so that it cannot access certain source reference(s) outside that scope.

The Pony language offers a recover mechanism that does exactly this. The recover block establishes the boundary between inner and outer scopes. For isolation safety, it restricts the inner block to “sendable” outer block references, as explained by the “How Does This Work?” section in the linked tutorial page. (Note: Pony uses the term “reference capabilites” for permissions, and it uses very different names for those capabilities. This blog post offers an additional explanation of these concepts in Pony.)

Early on, we described transitions away from uni as irreversible. And that is true if the transition is accomplished using move semantics. However, if we perform the transition using borrowed references, we open up an exciting new capability…

Allowing permissions to transition across references to the same object is exciting, because it opens the door to many useful data flow strategies and architectures!